Gadgetry will continue to relieve mankind of tedious jobs. Kitchen units will be devised that will prepare "automeals," heating water and converting it to coffee; toasting bread; frying, poaching or scrambling eggs, grilling bacon, and so on. Breakfasts will be "ordered" the night before to be ready by a specified hour the next morning. Complete lunches and dinners, with the food semiprepared, will be stored in the freezer until ready for processing. I suspect, though, that even in 2014 it will still be advisable to have a small corner in the kitchen unit where the more individual meals can be prepared by hand, especially when company is coming.

Robots will neither be common nor very good in 2014, but they will be in existence. The I.B.M. exhibit at the present fair has no robots but it is dedicated to computers, which are shown in all their amazing complexity, notably in the task of translating Russian into English. If machines are that smart today, what may not be in the works 50 years hence? It will be such computers, much miniaturized, that will serve as the "brains" of robots. In fact, the I.B.M. building at the 2014 World's Fair may have, as one of its prime exhibits, a robot housemaid*large, clumsy, slow-moving but capable of general picking-up, arranging, cleaning and manipulation of various appliances. It will undoubtedly amuse the fairgoers to scatter debris over the floor in order to see the robot lumberingly remove it and classify it into "throw away" and "set aside." (Robots for gardening work will also have made their appearance.) 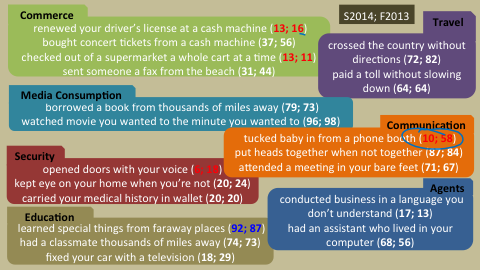 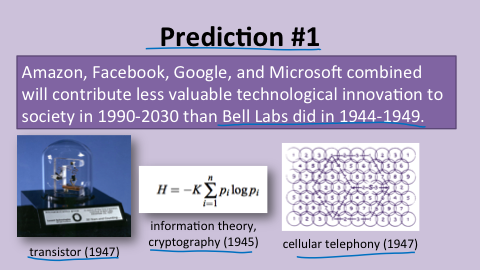 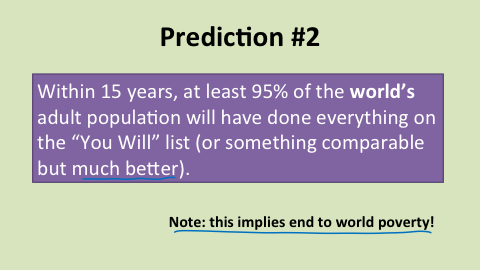 According to Growth rates of modern science: A bibliometric analysis based on the number of publications and cited references, the rate of growth is somewhere between every 8 years and every 29 years, so Tyson's estimate of every 15 years is very reasonable. 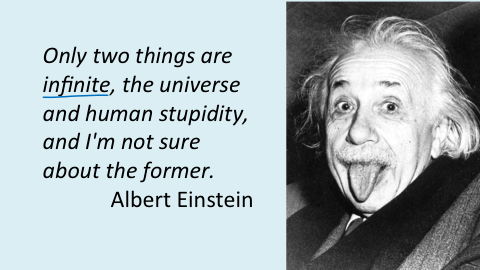 Being in a non-golden age field tends to make people bitter and anti-progress:

There follows this unforgettable observation: "Several university presidents and provosts have lamented to me that when a scientist comes into their office, it's to announce some exciting new research opportunity and demand the resources to pursue it. When a humanities scholar drops by, it’s to plead for respect for the way things have always been done. — Crimes Against Humanities: Now science wants to invade the liberal arts. Don't let it happen, Leon Wieseltier's response to Steven Pinker's Science is Not Your Enemy.

In the end, we can’t lose, we have William Shakespeare. — Mark Edmundson, quoted in As Interest Fades in the Humanities, Colleges Worry, New York Times, 30 October 2013. 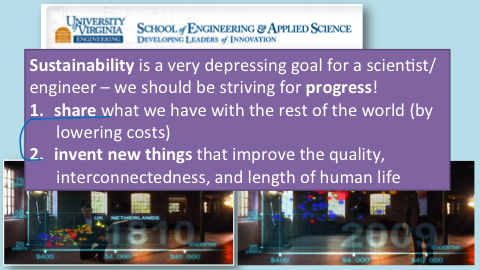 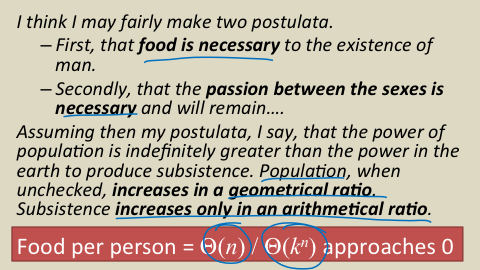 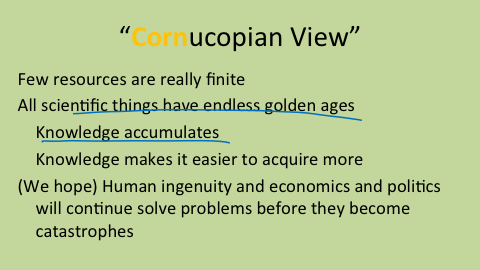 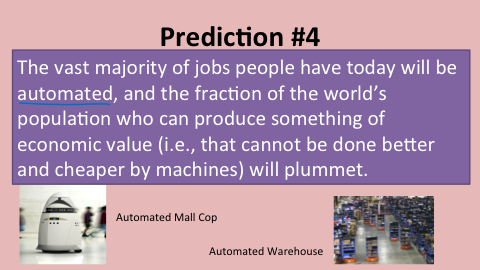 And Chili’s is optimistic that the tablets will pay for themselves by bringing in extra revenue from impulse orders and at-the-table gaming. Not only will you not have to talk to a waiter when you want to order something, you won’t have to talk to your kids, either!
— Of Course Applebee's Is Going to Replace Waiters With Tablets, Slate, 3 Dec 2013

Modern methods of production have given us the possibility of ease and security for all; we have chosen, instead, to have overwork for some and starvation for others. Hitherto we have continued to be as energetic as we were before there were machines; in this we have been foolish, but there is no reason to go on being foolish forever.


Bertrand Russell, In Praise of Idleness (1932)
(Note: you should wait to adopt Russell's philosophy until after you finish your project and your other classes!) 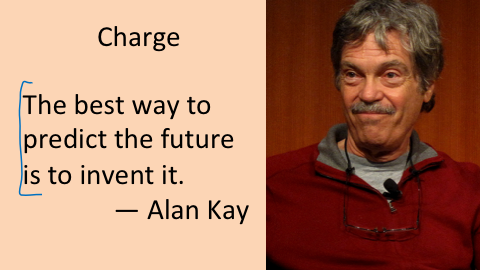 Optional (for most of your) Final Exam (due at 11:59pm on Friday, 2 May). See Submitting Projects for details on the final.

Everyone should submit these two web forms by 11:59pm on Monday, 5 May:

Earlier is better if you are ready.

From Peter Norvig's Keynote Address at the U.C. Berkeley Computer Science Commencement, 21 May 2006.

So my advice to you is to pick one of the 10,000 categories, or invent category number 10,001, and make some progress in it. Pick problems that are ambitious enough that your expected value over the next 20 years is at least your $3.4M/yr share. But worry about the value you produce, not just the money. America's first great scientist, Ben Franklin, said "we should be glad of an opportunity to serve others by any invention of ours". So be happy and productive, don't be evil, and be glad of an opportunity to serve others.

If you enjoyed this class, you may want to take my cs6501: Course to be Determined class in the fall.